I began freelance writing right after I left my editorial job at Penguin Group (USA). I trolled various freelance websites that famously paid very little for work that—in other contexts—was worth quite a lot more. But whether I was paid a lot or a little for my work was secondary to another, more daunting issue.

I wasn’t able to write for more than an hour a day.

What would happen if you went in for a job interview at some corporation and told them that while all of the other employees work eight-hour days, you would only work one hour? There’s a fancy name for what would happen: unemployment. If someone endeavored to write for a living but couldn’t do their job for more than an hour on any given day, they would have to do something else.

At this time, a client hired me to re-write her 100,000-word travel memoir. But when I sat down to write, I struggled to understand how to turn her story into something interesting. I would feel bogged down by the enormity of the task and throw my hands up in exasperation. I got so frustrated with the re-writing process that I simply had to stop as little as forty-five or fifty minutes later and then binge-watch TV or several movies. 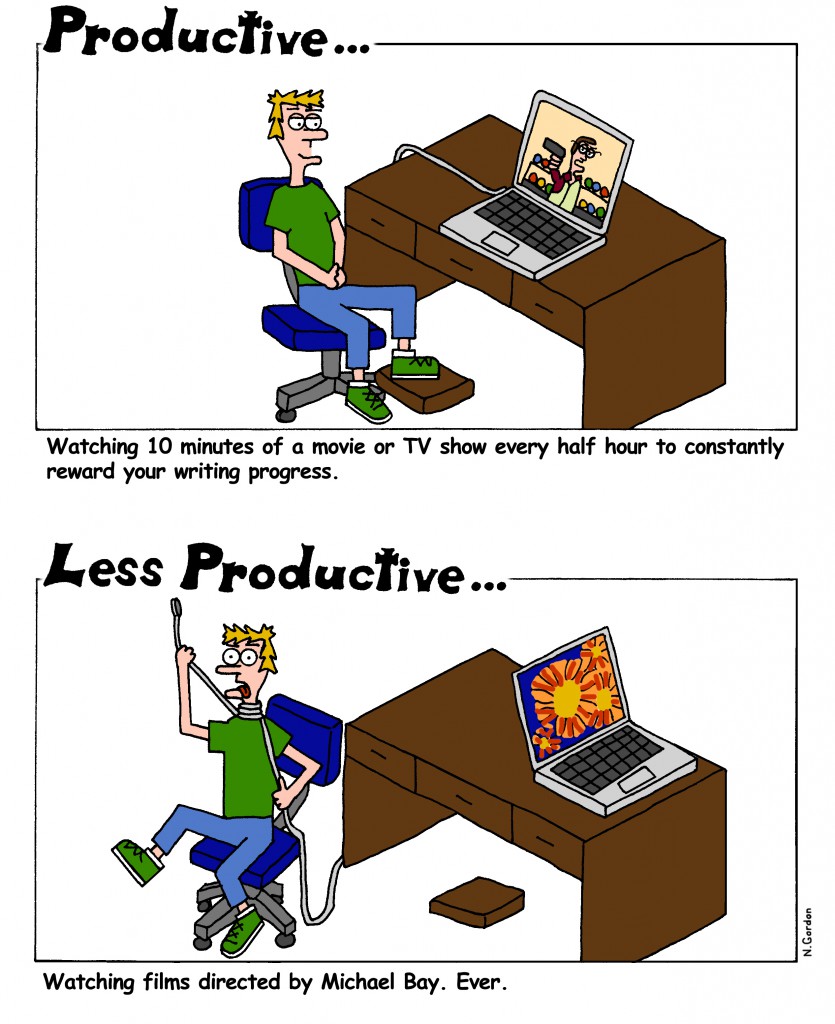 But, I had accepted the task. Several months went by as I squeaked out a little bit of content at a time. And after any given session, I would feel bad as I binge-watched more TV or movies. Eventually my client started to ask questions that suggested she was wondering why it was taking so long. Or, I could have been imagining that from all of the time I was spending not writing.

Something needed to change. After one particularly short writing session of perhaps 20 or 30 minutes, I went to start watching something—completely mad at myself like always. But then I realized something. Just because I started watching something didn’t mean I needed to watch it until the end, did it? I was watching everything on my laptop, and the computer’s video player had just as effective of a pause button as a DVD player, didn’t it?

This routine seemed to work for me, and soon it became a staple of nearly every writing session I’ve ever had since. I’ve run my way through thrillers, romantic comedies, and the entirety of the series Chuck. I call the watching sessions my “smoke breaks.” I’ve used this routine to write full-length, 80,000-word books in as little as two-and-a-half months, and it helps me to submit nearly every bit of content ahead of deadline. I’ve even written full 6,000-word chapters in a single day over the course of a nine-hour work day and the second season of Lost.

Can this routine work for others? Perhaps. But even if TV and film doesn’t work for you, consider trying to find ways to continually and repeatedly reward yourself for even a small amount of writing. This constant sense of feeling rewarded may be what it takes to keep you in the chair for two, three, and many more hours of writing.

Because, frankly, the other benefits of writing may take a bit more time to happen.