Why You Have The Expert’s Curse

If you’re struggling to get paid for your speaking…

It’s not because of your topic.

It’s because of The Expert’s Curse.

As in, you’ve spent much of your life developing an expertise that you’re now setting out to share with the world.

But when audience members tune you out to look at their phones, it’s not because of your topic.

And it’s not even because they have limited attention spans.

However, it’s not your fault that they’re tuning you out, either. You’ve spent many thousands of hours developing your expertise.

As such your brain has become hardwired to relate to the world through the lens of that expertise.

Language that no one else uses.

Language and the Brain

This is significant because we don’t form and express language in only one part of the brain.

See below, and four of the areas of the brain where we somehow relate to our use of language. 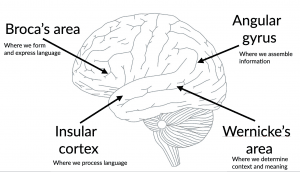 As you can see, we form and express language in Broca’s area. We assemble information in the Angular gyrus. We process language in the insular cortext. And we determine context and meaning in Wernicke’s area.

In other words, your expertise has given you a particular kind of brain that simply fires differently from everyone else.

So your language is different from everyone else’s, too.

This is The Expert’s Curse…

Having a brain that fires in a way that’s totally different from the people who would most benefit from your expertise.

If you’re like me you were rewarded throughout school for making your language less and less accessible.

Do you remember using flashcards or otherwise studying words that you would need to know on the SATs?

Our education system sets out to have those who don’t know advanced words and can’t write out dense texts to learn how to do so. We are rewarded for speaking and writing less and less like those who don’t learn what we learn in school.

In this way, and depending on the emotional maturity of those participating in the process, many people use higher, more advanced forms of education as a way to exclude others from their work. They write papers and books that can’t really be accessed by those who don’t have the same vocabulary as them.

They create content that I guess is more about their proving their intelligence than empowering their audience.

This simply won’t fly when seeking to build momentum for your ideas in the world outside of academia.

Looking at the Most Influential Among Us

Many experts secretly wish to see their name at the top of the New York Times bestseller list or with a TED talk that has tens of millions of views. They have dreams of attracting the kind of success that people like Brené Brown and Simon Sinek have achieved.

But if you were to study the text of a nonfiction book that’s sold millions of copies, you would find that these books are written at a 7th grade reading level…

If you run the first couple of paragraphs of Brené Brown’s recent book Atlas of the Heart through Hemingwayapp.com, you’re told that it’s written at a sixth grade reading level.

And if you run the first couple of paragraphs of her famous TEDx talk on the power of vulnerability through the app, it shows that it’s written at a fourth grade reading level.

My point is that people respond most to accessible content, and yet educators have trained you from the beginning to be less and less accessible to others.

By using the very system that was supposed to prepare you for life.

This is The Expert’s Curse.

Click here to take a free training that will introduce you to this antidote and show you how you can use it to set your expertise on a whole new trajectory.