What these Awful Lego Sculptures Teach Us About Writing 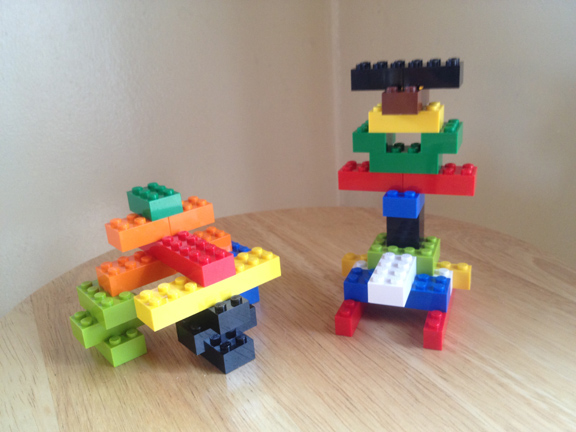 Take a look at these Lego sculptures. I mean, look at them. One looks like the bottom half of an oilrig and the other looks like a rainbow moose balanced on top of a hovercraft. Awful. No coherence, no sense of playful whimsy.

I created these two sculptures this morning during my writing session. Part of my daily routine is to do some creative writing right after my morning yoga practice. I play music for an hour and write until the music stops. Mostly. I get distracted by Words With Friends and Buzzfeed as much as the next guy, but usually that hour is devoted to creating fiction.

The problem I’ve encountered recently, however, is that I’ve gotten so wrapped up in creating something of value that I haven’t given myself the chance to write something that isn’t of value as a first draft. I become quite methodical and systematic in how I outline a chapter, and even go so far as to challenge each beat of each chapter with questions like “why is this beat important?” and “how will this beat be achieved?” These are valuable tools to me, but the labor-intensity of planning everything out like this was undermining my progress. It would take me weeks just to write a chapter. This is, of course, how some people write. They plod along and consider it a good day if they even just get one good sentence written. 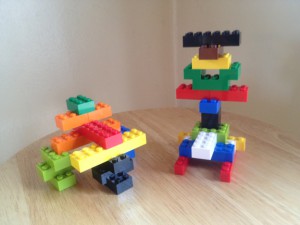 However, even with all of my planning, I wasn’t coming up with a lot of good sentences. I was very willing to admit to myself and others that I’m working on a “crappy first draft” of a story.

So, then, if this was just to be a poor first draft, if I knew that the value of this story would likely only come out if I revised the hell out of it, then why fret so much over its quality?

Why should I be so damned afraid of what I was putting on the page?

What ultimately plagued me—and I’m told plagues many other people plodding their way through works of fiction—is fear. Fear of putting something down that makes no sense for a character, relies too heavily on clichéd devices, or is just bad. Fear of being wrong.

So I decided today to incorporate my love of Legos into my writing routine. Usually, when I build something with Legos, I have an idea of what I want to make. It might be a spaceship, an apple, or the television actor Michael Emerson as he realizes he shouldn’t have had that third cup of oolong tea. 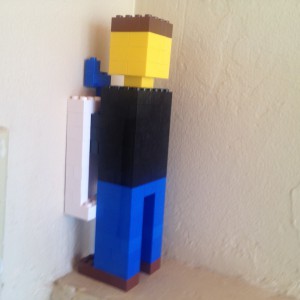 But today when I felt a lull in my writing crop up I gave myself different instructions: Build just by putting some pieces together without any sense of where you’re going with it. Build with a willingness to be wrong.

So what happened? Those sculptures happened. And yup, they are awful. But doing this served as a reminder that it didn’t matter what quality I achieved with the first draft of what I wrote today. Alongside these sculptures, I also created an outline for my next chapter that I will now bang out in a day or two instead of weeks.

Will the chapter be of any value? I have no idea. But if we’re too afraid to be wrong, then we’ll never create anything of value in the first place.