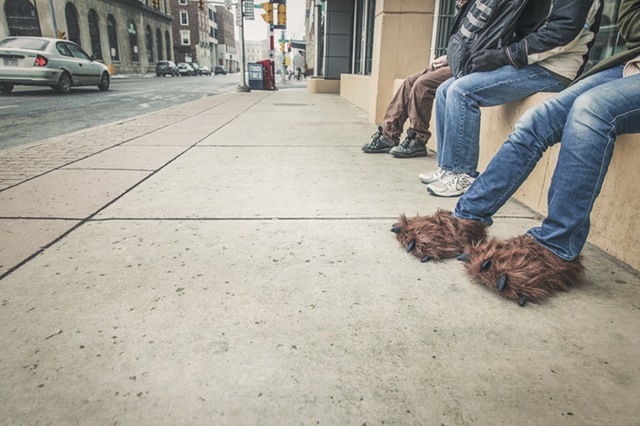 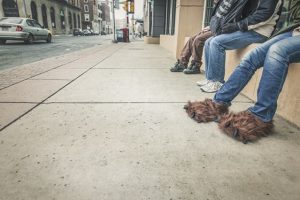 I was really excited to play King Louie in my fourth grade production of Jungle Book. This was a musical that was based on the Disney movie of the same name, and featured all of the songs that made that movie famous. Though King Louie wasn’t a big part, playing this orangutan definitely gave me an opportunity to be goofy onstage. How could I not be, if I was to play a big ape?

The first performance of the show was also the first time we had the whole set put together and all of the costume details worked out. I was to sing the classic “I Wanna Be Like You,” and when I sang it I danced around and kicked my legs every which way.

Except, my teacher had put big, fluffy gorilla slippers on my feet as part of my costume.

And midway through my number, one of those slippers fell off my foot onto the floor in front of the stage.

So there I was, in the middle of my number, and I was one gorilla foot short of a full costume in front of half the students in the school. What was I going to do?

Then, in the next moment, I realized that one slipper falling off wasn’t a problem—it was an opportunity. A split second after the first one slipped off, I made a decision. I reared my other foot back and flung the remaining slipper off my foot.

It sailed halfway across the cafeteria and into the audience.

And of course the crowd went wild.

What started out as a problem became a staple of every performance I did of Jungle Book thereafter. When we got letters from the first and second graders talking about the show, they wrote how much they liked that “the lion” (apparently I didn’t look like an orangutan to them) kicked his slippers into the audience. I learned that day that problems can actually be our best opportunities.

Now, let me ask you something. Did that passage about something that happened my life constitute a story? Yes, it did. It had a beginning, middle, and end. Was it a story worth telling? That will ultimately be up to each person to decide for themselves, but let’s say for now that it was. The question then becomes, while many things have happened throughout our life, what is it that makes one of those things more worthy of being told as a story than others? What makes our life worth sharing? 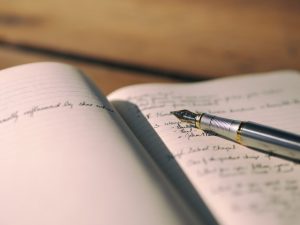 This is a key question we ask ourselves if we set out to write a memoir, or even if we want to share a story as part of an essay, a talk we’re giving, or even a case study when providing instruction. But as we all know, telling true stories about our lives will happen among many, many other people attempting to do the same thing. Indeed, the world of memoirs is a very crowded marketplace.

But the reason for the Jungle Book story being one worth telling is a startlingly simple one. It’s the same reason why stories find their way onto shows like This American Life, and why some memoir manuscripts get book deals and others don’t.

When I set out to do that first performance of Jungle Book, I thought those slippers would stay on my feet. But one of them really, really didn’t. I thought one thing was going to happen, but something else happened entirely.

In each event from our life worth telling, something unexpected happens.

This occurrence of the unexpected frames every moment of our life worth sharing. Why? Because when our life is disrupted in a way we didn’t expect, we then have to conduct ourselves differently than we would have otherwise. And when we do something differently, we get a different resolution. This change in our conduct compels us to learn something new. And this lesson we learn from that which we didn’t expect becomes the valuable nugget that our audience can take away from their experience with our story.

The value of a true story from our life is defined by the extent to which it incorporates the unexpected. Our journey on the page begins with our showing how those moments of surprise became moments of growth.

If you’ve already begun writing your memoir, but are unsure about whether to pursue a traditional publishing deal or to self-publish, check out my cheat sheet here for some guidance.