The 7 Deadly Sins of PowerPoint Slides 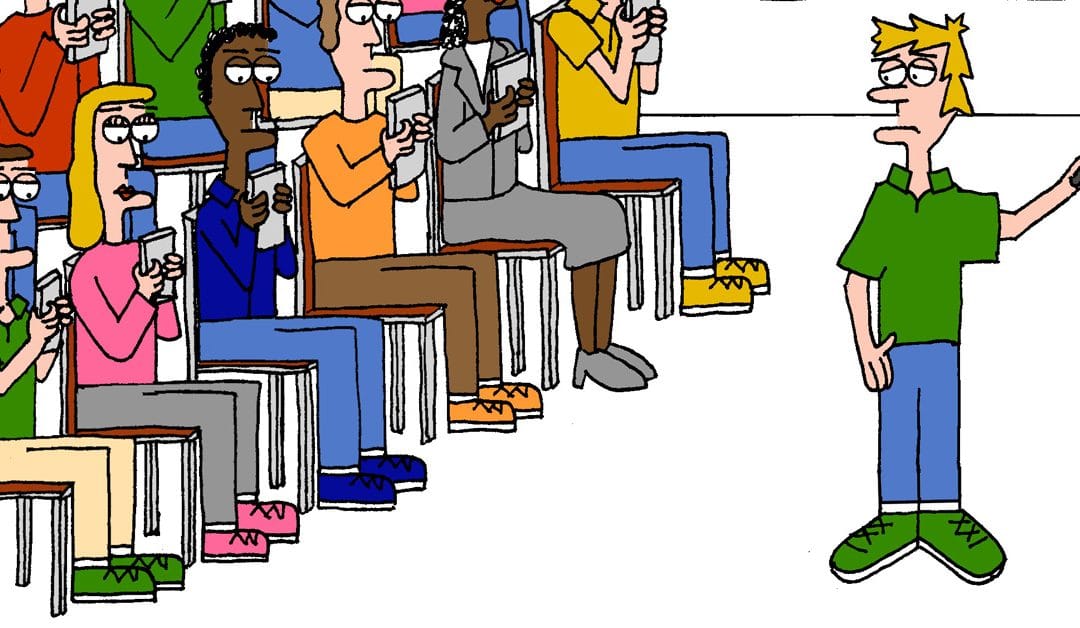 I recently spoke at a conference, and arrived early enough to watch the presentation before mine.

By the end, nearly half the audience members were on their phones, having completely tuned the speaker out.

I counted at least two audience members whose distraction of choice was Candy Crush.

While there were many things I would have had this poor presenter do differently, the most egregious mistake he made was in his use of PowerPoint. His slides were such a hindrance to getting across his content that I was amazed that he even aspired to speak.

But then I remembered something.

Those mistakes he made? They’re everywhere.

Indeed, what most public speakers don’t realize is that the standard way of creating a slide deck is a primary factor in why they hear crickets at the end of their presentations. Most speakers commit 7 deadly sins with their slide decks that run the risk of killing their presentation.

And one in particular is the most debilitating one of all.

Sin #1: They Put too Much Content on the Slide

The secret is already out on this one. You may have already heard how distracting it can be to an audience member to be listening to a speaker and then suddenly see an avalanche of content on the slide – tons of bullet points in 12 pt Times New Roman.

When this happens, the audience member then has to decide whether to read the slide or listen to the speaker. And because of this ambiguity, they won’t be able to do either effectively. And then you’ve lost them.

Instead, go sparingly on any one slide. Only present a simple amount of content to emphasize what you’re saying. 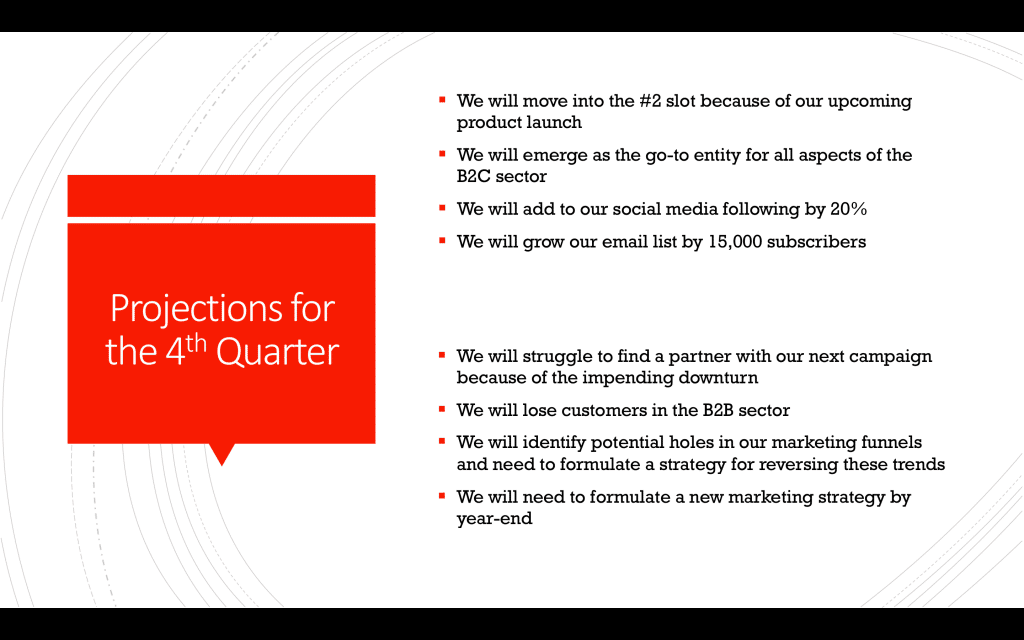 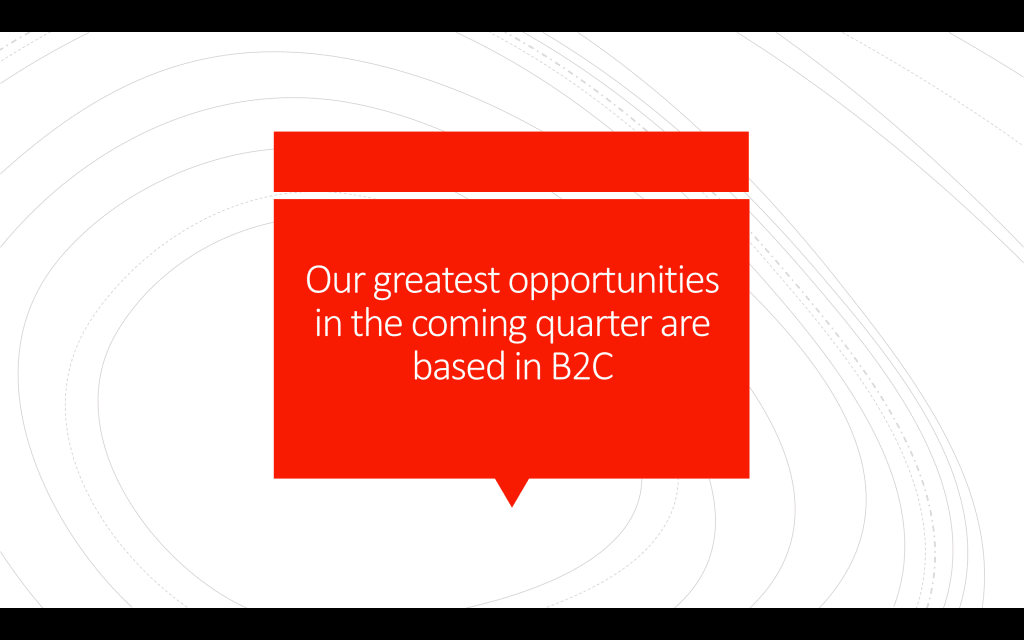 Sin #2: They Show All of the Slide’s Content at Once

A close cousin of sin #1, what most people don’t realize is that PowerPoint and other slideshow software platforms have given the speaker a very powerful gift: animation. As in, a speaker can click a button and show only one part of that slide’s content at a time. One bullet point at a time. One picture at a time. One word at a time.

This is a powerful thing to do because at no point must the audience member decide what to look at on the slide – they’ll only look at the newest thing they see. This way you can keep their attention exactly where you want it to be.

James Veitch’s TED talk on “This is what happens when you reply to spam email” is a perfect example of animating a single slide one element at a time. Give it a look to learn from the master.

Yeah, I’m surprised by this one as well. But the gentleman whose presentation I described at the beginning of this article did this: he had content on (very dense, not animated) slides that he excused when he said “We don’t really need to go over that now.”

He did this multiple times.

Essentially, he and many other speakers include content on their slides that they don’t actually need, perhaps because they’ll be giving out the deck afterwards and they want their audience to have it. This is of course an understandable impulse. But they can give away a PDF with that content just as easily – and not distract their audience with it during the presentation.

The takeaway here is likely obvious: only include content that you’re going to talk about in your presentation.

Sin #4: They Have Nudge-Nudge-Wink-Wink Photos

What, you may ask, is a “nudge-nudge-wink-wink” photo? Somewhere along the lines somebody said that having text on slides was bad (side note: James Veitch has text throughout almost his entire TED talk and has tens of millions of views). So what speakers started doing was including more images.

Fine. Nice idea. But what also started to happen was that speakers would say something in earnest and because they feel they need to fill in every moment with a slide they would include a photo that somehow jokingly, ironically, or figuratively represents what they said.

So if they are a management consultant and are talking about how much they struggled to find their tipping point, they may show a rock climber struggling to get up a mountain.

But when we’re being figurative like this, our audience must take a moment to interpret the image. And even though that’s likely for just a split second, it’s still a split second when they’re no longer paying attention because they’re analyzing.

Instead, show pictures that are actually what you’re talking about. Here’s a graph showing how low fourth quarter numbers were. Here’s a picture of a man with whom I worked last year. Etcetera. 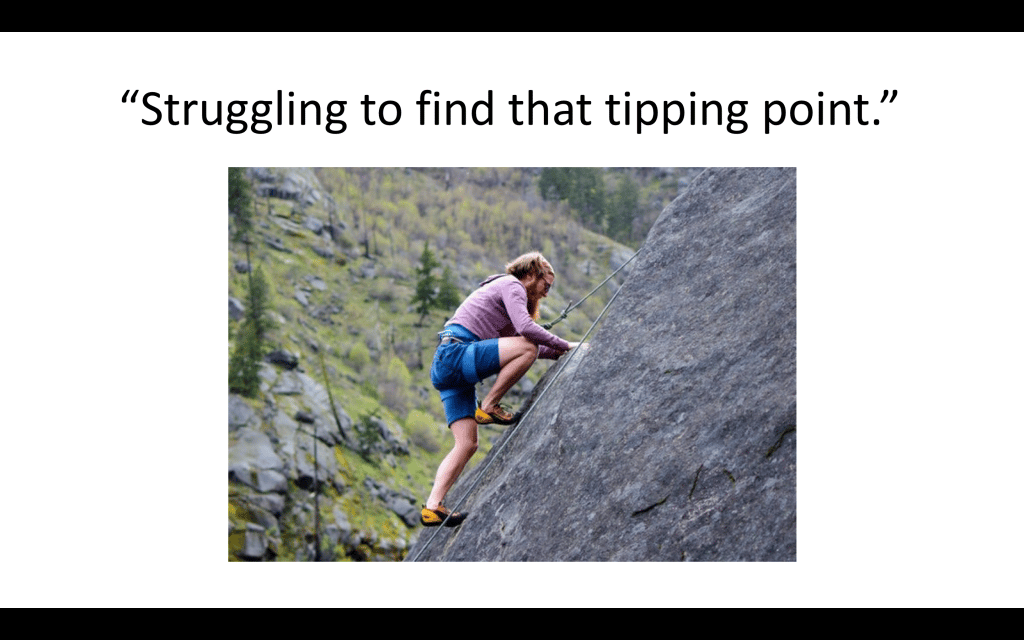 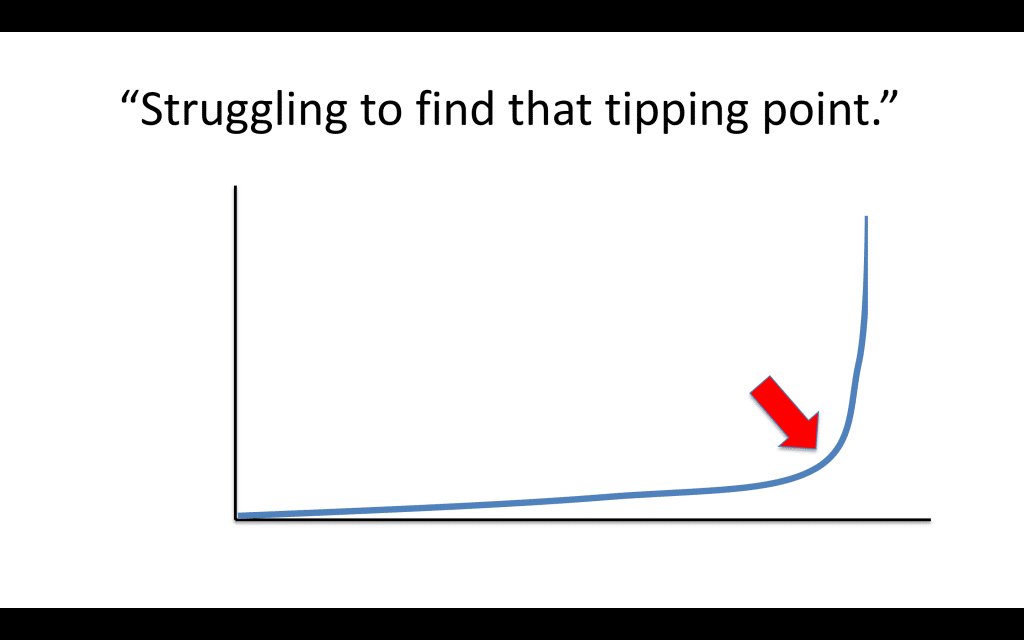 Sin #5: They Include Nonsensical or Complicated Graphs

Back in my Penguin days, I worked on a book wherein the author included all sorts of complicated graphs that had a bunch of amorphous shapes overlapping in incoherent ways. To this day I have no idea what those images were meant to convey.

When an audience member is listening to a presentation, they’re taking in both you and the slides. There are other potential distractions vying for their attention as well. Instead of creating complex, potentially nonsensical graphs, present images that feature super simple relationships: a line graph, a pie chart, a simple table of items.

And remember sin #2, especially if you must have a more complex graph – you can animate one part of it at a time. 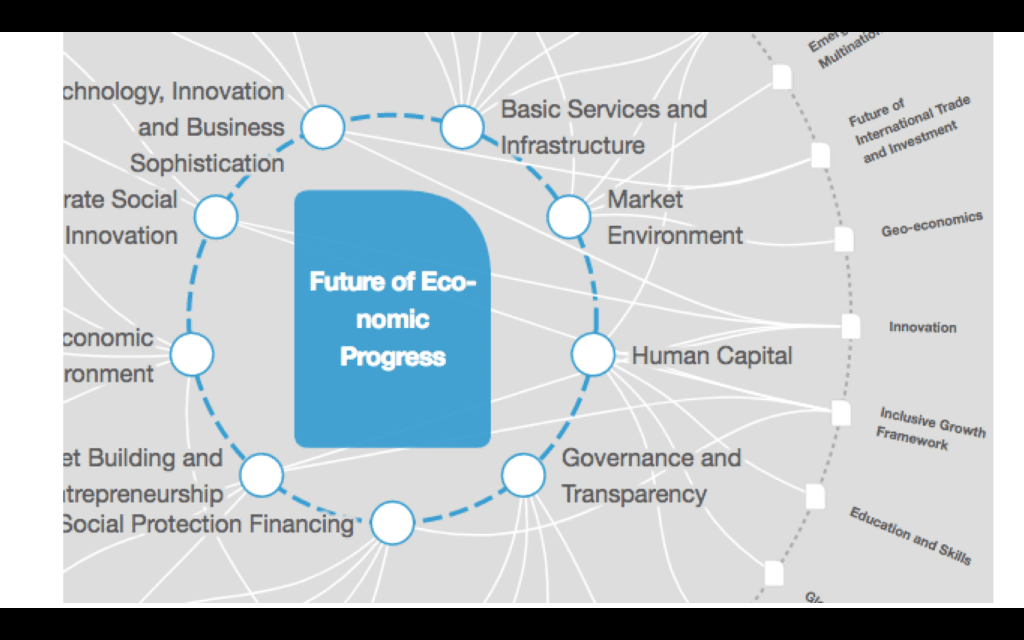 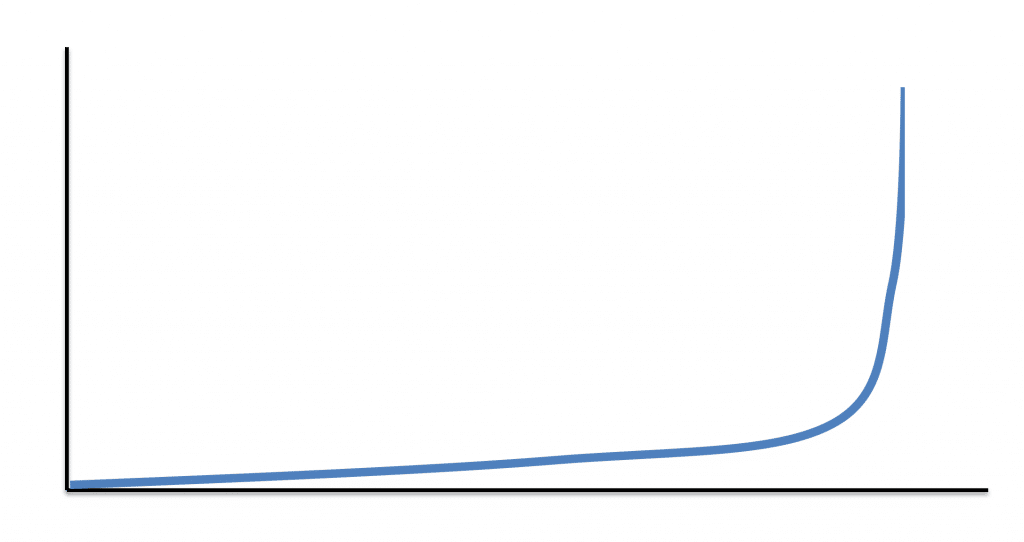 Sin #6: They Choose Form Over Function

Many speakers put time and resources into ensuring that their slides are beautiful – well designed, thematically linked to their brand, everything.

But not a single audience member cares about how well branded your slides are. They care about solving a problem that your expertise will help them to solve. While I fully support you having well-designed slides, what I encourage you to steer away from is having such a richly designed slide that your audience has to sort through the sophisticated visuals to find the content that will actually help them.

Instead, use a simple template aligned with your brand’s themes – or even just stark slides like I do. The less they have to look at, the better. 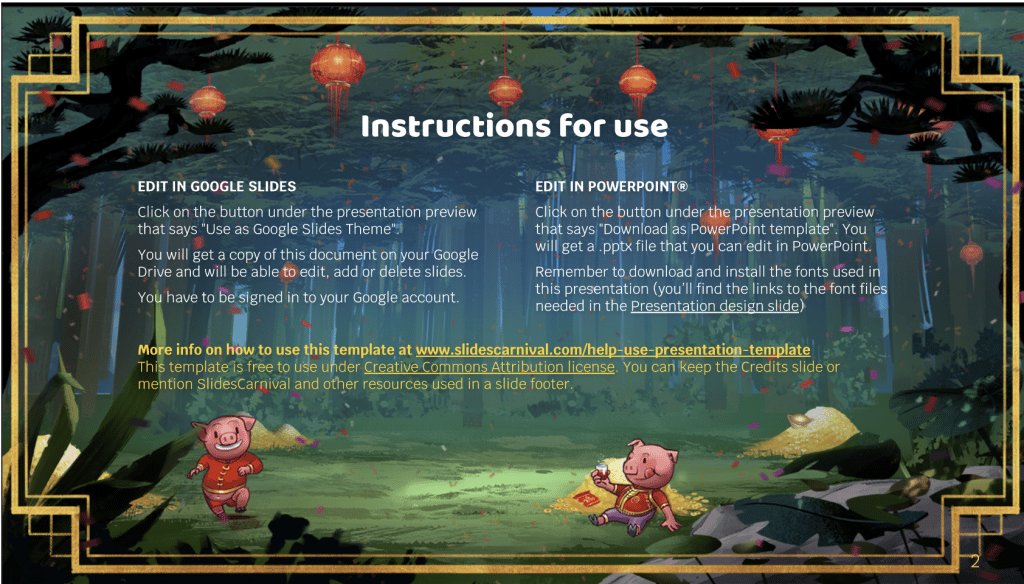 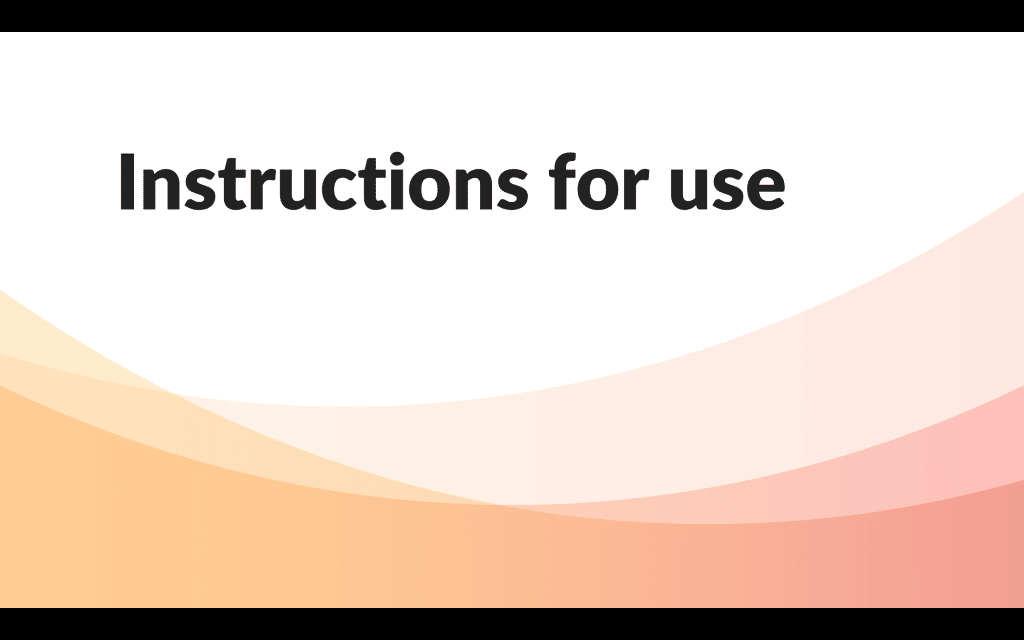 Didn’t I tell you that one sin in particular was the most debilitating? I guarantee you that no one is coming to your presentation to see slides. They’re coming to solve a problem with your help.

Allow yourself to not even use slides if your content doesn’t lend itself to certain statistics, graphs, images, or noteworthy statements. People aren’t empowered by slides, they’re empowered by the possibility of change.

So just stand in front of them and help them to create that change. For that is what will make them want to work with you even more. 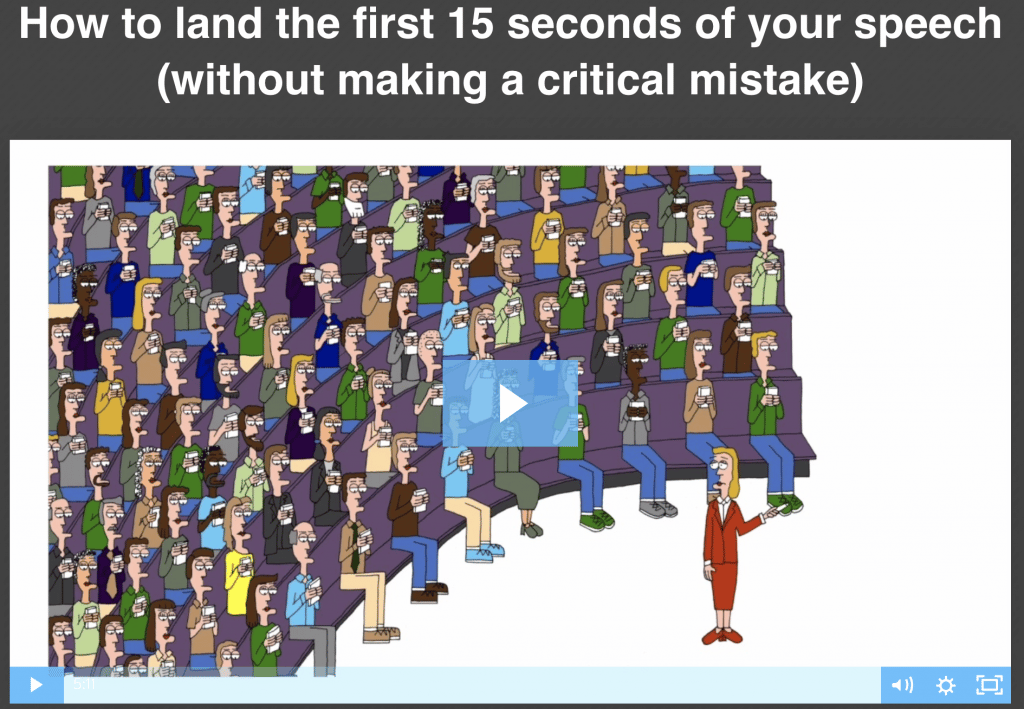