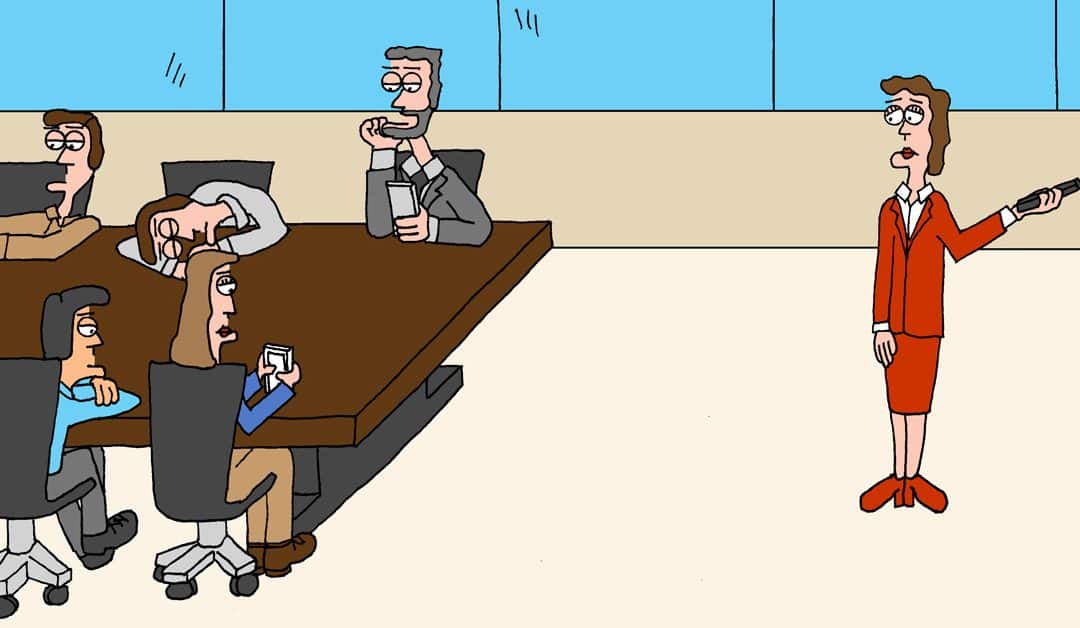 “You could hear the pin drop,” my client told me.

This was a conversation we were having a couple of hours after she had given a 10-minute presentation at the children’s hospital where she worked.

And in this moment she was describing what had happened as soon as she started speaking.

Usually when she spoke at the hospital, audience would tune her out.

They would look at their phones.

They would glaze over and just politely clap at the end.

But this time they rushed her afterwards and one person even invited her to apply for a grant.

And it started in the first 7 seconds of her talk when she said this:

“I wasn’t able to prepare this presentation the way I wanted to because I spent last night with a boy who doesn’t have long to live.”

Of course everyone was rapt at attention after a sentence like that.

How Most Speakers Start their Speech

Most speakers when they start a speech visit with the audience.

“Oh, thank you so much for that lovely applause!”

But this squanders incredibly valuable tension.

The opening of a speech is like the start of a race. Anything can happen, so spectators are filled with a sense of possibility.

The same thing is true for the start of a speech. But when the speaker visits, they squander that tension and sound like everyone else.

Instead of opening like everyone else, what if you walked out, looked at the audience for a moment, and just started telling a story?

What if you dared them to not pay attention else they might miss what happens next?

Rather than just say something like, “I was born in a small town to civil servant parents,” you started immediately in a scene?

Or, like my client did, you were transparent about why you were unprepared?

The more immediate the stakes of the story you start, the more captivating your opening will be.

And, there’s an infinite number of ways you could hook your audience in with an opening line.

But here are five ways to get you started.

Perhaps you or someone you’re describing had expectations of something turning out a certain way and those expectations were dashed by a poor result.

This is powerful because everyone’s had their own disappointments in life and hearing of someone else’s is immediately compelling.

Plus, they’ll want to root for the person with the disappointment in the hopes that it turns out okay in the end.

This might be something like, “After a week on my new diet I stepped on the scale eager to see my progress – but I had gained 3 pounds.”

Sometimes, we face a dilemma, an obstacle, or an all-out crisis.

As in, if we don’t do something quick we’ll suffer greatly.

People don’t want to suffer, and they feel invested in someone from a story avoiding such hardship themselves.

This means that starting in the immediacy of such a crisis will draw your audience in instantaneously so they can find out the resolution.

An example of this is, “I arrived home in the ten-below-freezing temperature and realized that I was locked out of my home.”

#3 – The Moment Before an Outcome

Stories by their nature are driven by people with goals. Consider how the film Finding Nemo is not only driven by Marlin’s goal of finding his son, the goal is actually the title of the entire film.

What this means is that it can be quite captivating to start the audience off in the moment before an outcome is about to unfold.

It’s so immediate to an anticipated result that the audience will anticipate that result right along side of you.

This is what happens with a sentence like, “I placed my hand down on the card the dealer had just put in front of me, and I slowly peeled the card off the table to see what it was.”

#4 – The Moment During an Outcome

A close cousin of #3 – and arguably more ambitious – this device involves setting the audience in the exact moment the outcome is unfolding.

This ambition lies in the fact that by describing the outcome right off the bat the onus is on you to keep the audience transfixed since they’ll know from the start how that moment turns out.

Consider how this is sort of like what happens with prequels – the audience’s interest is in seeing how everything comes together.

You can see this in a sentence such as: “I watched as the ball I had just kicked barely made it above the goalie’s fingers and into the goal.”

#5 – A Moment of Transparency

There are many who speak to how transparency and authenticity are valuable assets when speaking on a stage.

And I certainly agree.

But how could this idea be utilized to your advantage?

My client’s opening line was, “I wasn’t able to prepare this presentation the way I wanted to because I spent last night with a boy who doesn’t have long to live.”

This was an apology of sorts, recognizing that she had a commitment to that audience but faltered because of something that just happened.

Perhaps you might also provide an apology, or a confession, or something else that then moves the audience into the rest of the story.

Remember, these various approaches to your speech opening have potential because of their immediacy.

The more immediate the stakes of the story you start, the more captivating your opening will be.

With this in mind I encourage you to give special attention to your opening 7 seconds as it will set the tone for the entire rest of your speech.

And what might that speech look like? It may surprise you to know that there’s a certain ingredient that will make you completely unforgettable onstage.

Check out this training to see what it is.