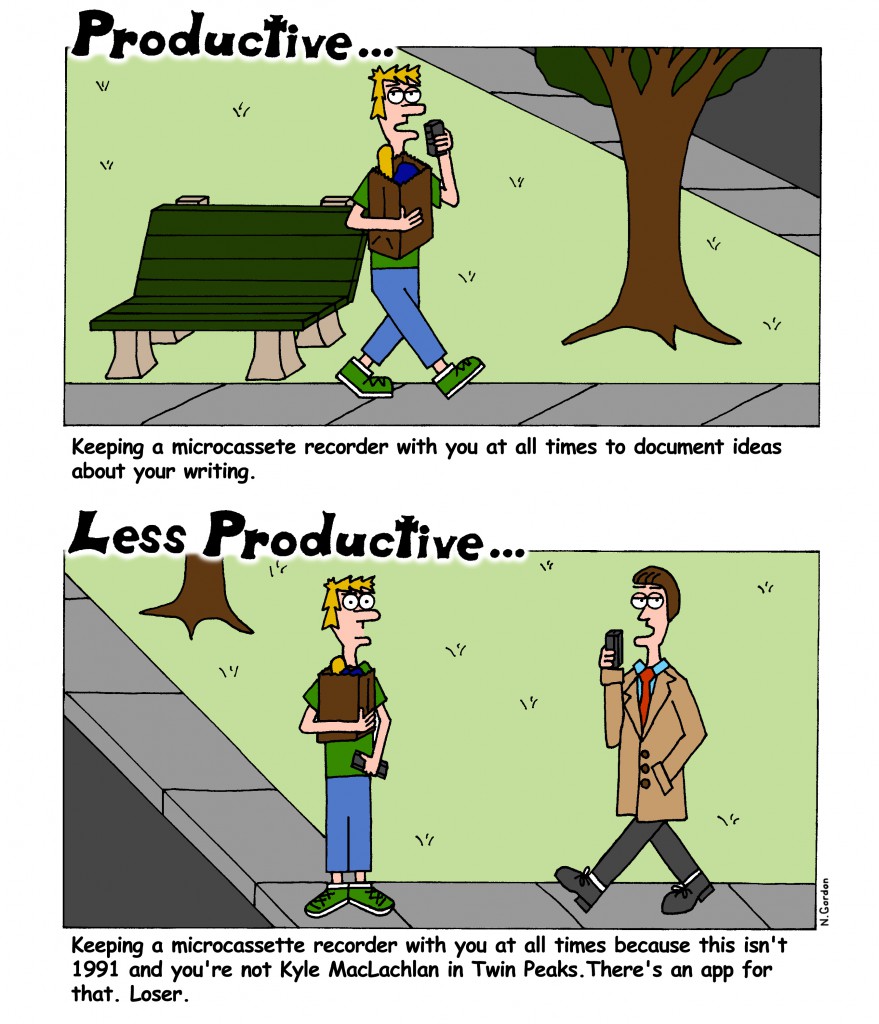 I took a playwriting course senior year of college. My professor recommended that we get a microcassette recorder and keep it with us at all times—one never knows when the muse will strike, after all.

Except, that was during this whole other thing called “the 20th century.” These days, we’re already burdened with so many other devices that it makes no sense that we have a single device dedicated solely to the act of…recording.

The question then becomes, what are the best ways to get an idea out of our heads and into something that can be referenced later on?

1. The Voice Memo App on Your Phone

Well, duh. The reason why we don’t need a recording device is because most of us already have a smart phone banging around in our pocket. Unlocking your phone and then recording something real quick can be very helpful in making sure you preserve your latest brainstorm. Be sure to have it on your first screen so you don’t have to go through as many steps to get to the record button.

2. The Voice Activation Software on Your Phone

While I have a love/hate relationship with Siri, it or another software does have the benefit of taking down your thoughts without having to even unlock your phone. On the flip side, though, it requires you to observe certain protocols (e.g. saying “Take memo that…” before giving the memo itself). However, if you drive a lot, this is an ideal solution for when you’re behind the wheel.

No, I don’t own one of these. And no, I don’t plan to own one in the near future. But, apparently you can just say “Hey Siri” to it, and it will respond. This is a lot like engaging a computer with the word “Computer” on Star Trek, which is pretty freaking cool.

4. A Dry Erase Board/White Board

You may notice that this article isn’t called “5 Ideas for Instantly Recording Ideas Wherever You Go.” This is because you may indeed find yourself having ideas while you are chopping vegetables, reading on the couch with your Kindle, or mopping the floors. If this is the case, the easiest way to record an idea may very well be to have a dry erase board in one or more of the rooms of your home. My large board is one of my prized possessions, mostly because I work at home and have about 90% of my productive thoughts there. Remember to buy your markers by the box on a site like Amazon if you go through them like I do.

Well, sure. You could go old school. If you’re like that and really don’t mind adding something else to your pocket. Consider the possibility of keeping a tiny pad with a comparably tiny pen with you. Some miniature pads are only 3” by 4”, and even come with comparably miniature pens.

More than anything, the most important factor in how you go about recording ideas is that, of course, you record them. Your ever-changing sense of productivity will thank you for it.